Over these past thirteen years we've realized that in our times of genuine struggle, we can know God's peace and permit it to rule in our hearts.  Maybe we can't always see the road ahead, but taking it as it comes and not as we wished, we've realized that sometimes it takes experiencing what we'd feared the most to feel real hope.  That's exactly what's happened at Home of Angels.

Edwin, Precious and Pastor Richard are continually looking for the broken people and places, trusting God to give them the wisdom and skills in making them better again.  With the children, who are our priority, we are training them to obtain a skill for survival outside our home walls.  The final phase will be a sewing centre built on the 3rd compound.  Containers with used clothing have been stopped by the government from entering Uganda, so sewing is a huge need, especially for women's clothing.

These six trades being taught to our children have been noticed by the public.  Many homes raising orphans have them phase out at 18-years-old without any skills for survival.  We've been informed by the police that the boys usually end up in prison and the girls get pregnant.  City officials have now requested permission to use HOA as an example for other homes to follow.

Global warming has effected our entire world, but in Uganda where we live, they see it by their seasons changing.  Many people don't understand why years of planting a certain season has changed to a different part of the year.  If they can afford seeds to plant and that's always an "if", why is there little sun and also why are the rains so torrential that everything, including their homes are being washed away?

Throughout all these sad situations are "Rainbows of Hope" both at HOA and in our community.  Our children are so happy having a good education thanks to their sponsors; to experience love of having a family and a daily meal.  In the community we provide work for our neighbours, have had help feeding the hungry and constructing boreholes in areas with no water.  Now with our church, we are able to gift Bibles for many. 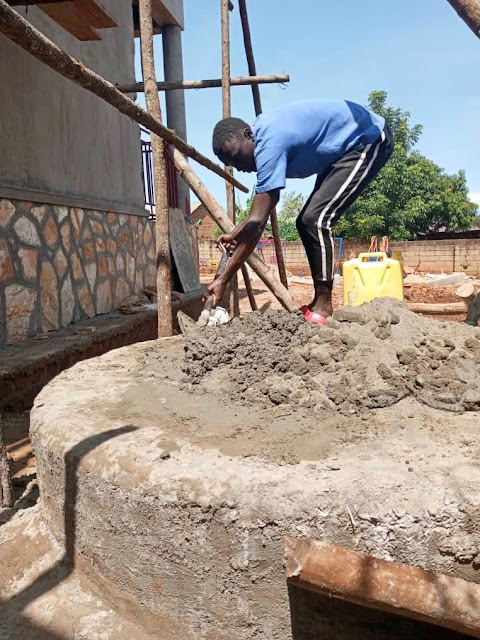 Junior will be finished with school in December but until then he has work when he's not studying.  He loves it and eventually will be able to have a little house on his own in 2023.  Little Junior is now 6'3'. 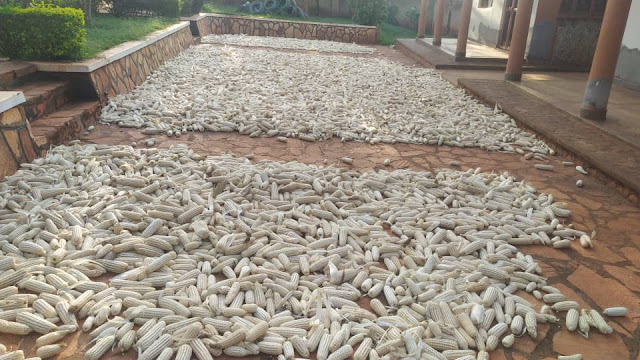 Until we can start the two homes for the children that are phasing out, we are utilizing the land to grow maize for our Home of Angels.  Due to the rising costs, Edwin decided to use the land for crops until the construction starts. The children will harvest and prepare it for storage until the winter. 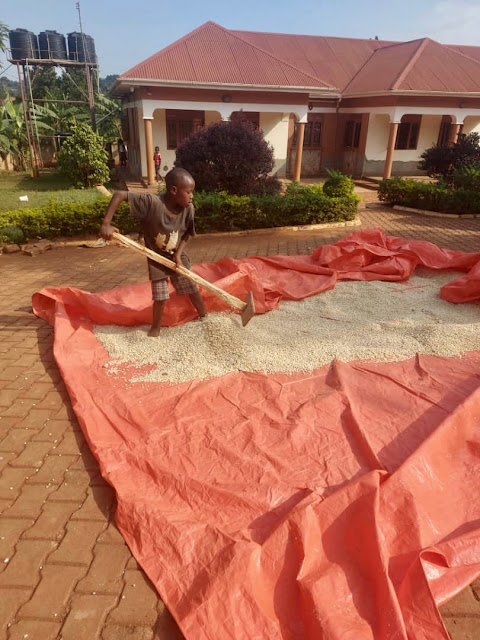 This is our movie star Yasin who starred in the Human Project filmed by Apologetics Canada.  I am so sad to be on this side of the world right now because seeing these children growing so fast, I'm hardly recognizing them. 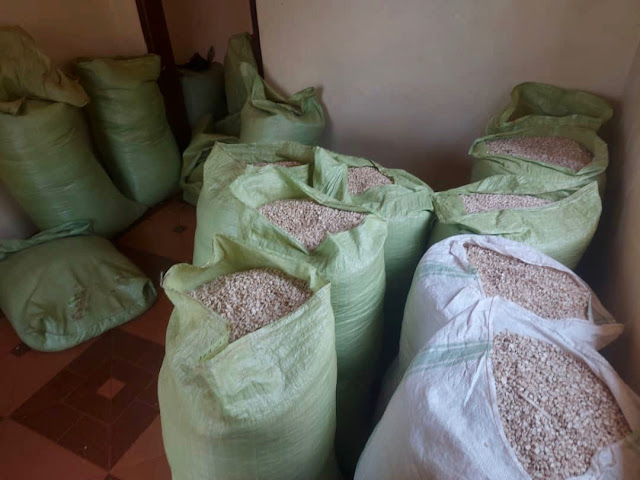 The children pounded the cobs and removed the kernels producing 700 kilos from this crop.  Because Uganda is a landlocked country and most products come through Mombasa, we are preparing for the worst with an election this week in Kenya that has been known to be quite violent.  Many people have already migrated into Uganda for safety. 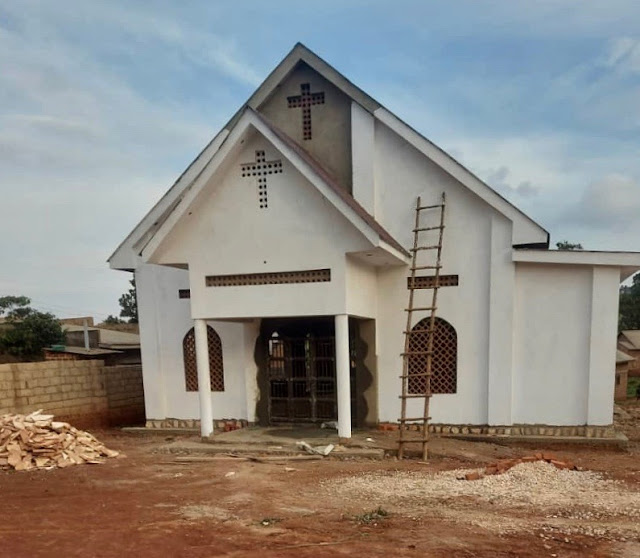 The church is almost completed except for the finishing coat of paint over the primer and the grounds to be cleaned up before the boys will plant the grass, one root at a time.  It was supposed to be open at the beginning of August but Pastor Richard recently lost his mother.  In Uganda when a family member passes, it can last two weeks with family members waiting to greet the friends and family coming from a distance.  The funeral was a few days ago with approximately 2,000 people attending. 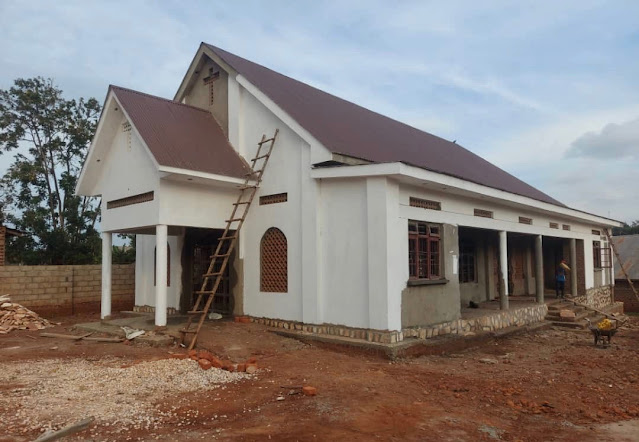 Another view from the side.  This church will hold up to 500 people but the community is very excited and they're realizing that there could possibly be many more.

This is an example of the rains now.  You can get an idea of how very strong they are. 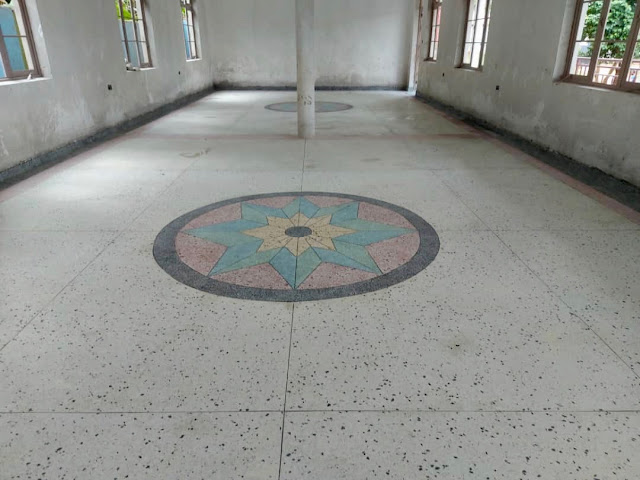 Because of so much happening in our area and currently at our home, I don't have a picture of the finished room to show you.  This room is in the Bible school that Precious donated.  Paster Richard has 19 pastors that will be attending classes in the very near future coming from as far away as Kenya. 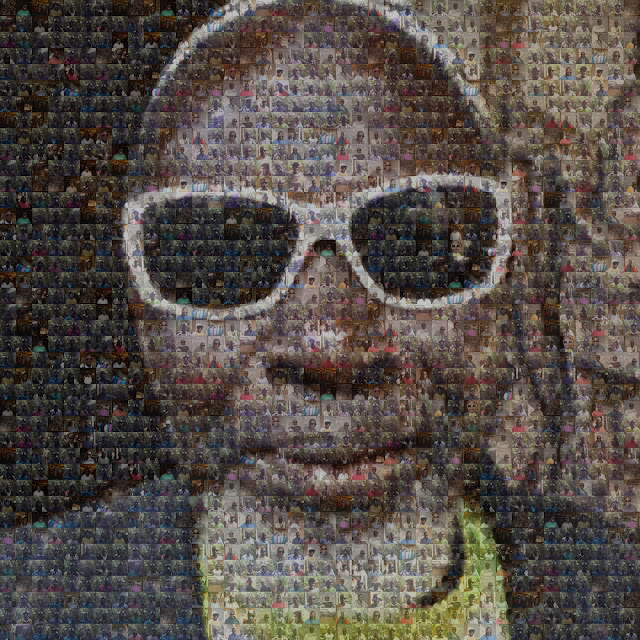 If you look verrrry closely, you will see many faces....many many faces, I would say over 400 faces.  I recently found this picture that our friend, Johnny made from "Hackers for Charity" in Jinja.  When we sent the container to Uganda, a donation of 700+ sunglasses were donated to the people.  Johnny had the brilliant idea to give the boda-boda (motorcycle) drivers each a pair because many of them couldn't afford helmets.

Currently, we're housing 38 children at HOA.  Our dream is still for 50.  Most of them are young but the first group that arrived in 2013 are about to leave in 2023/2024.  Hope and Desire were accepted into YWAM last year and they'll be leaving first.  We wanted to make a gift for each child as they departed that would be a memory of their past, their brothers and sisters and all the activities they were involved in.
For Hope and Desire, they have been very blessed at YWAM.  We have been instructed that they will need a passport in 2023 as they'll be travelling somewhere in the world to another YWAM centre.  We literally shake our heads realizing where they started and where they're heading in their future.  The remaining girls that will be leaving next year want so badly to go when it's their time to phase out but that's a subject for another day.  We've been very blessed and all of us realize that these blessings will continue into the future.  God is in full control and He won't let us down.
So many of you are praying for us and we all want you to know how grateful we are.  Thank you!

Posted by Jaaja Barb's Home of Angels at 3:28 PM