Peace In Our Hearts

When we put our problems in God's hands, He puts His peace in our hearts and that's exactly what He's done these past few months for Edwin and I.

I'm sorry for not creating a blog sooner but with the issues Edwin has had to deal with lately, we've had to focus on those instead.  As you know, Edwin's fiances' parents died in a head-on collision recently.  Her grandmother died soon after and now, Edwin's father is in the hospital. They had planned to get married in a few months but with all the current worry and sadness, only time will tell.

In our country Canada, it's normal for us to have had shots for measles and chickenpox as a child, but in poverty-stricken countries like Uganda, the people cannot afford them.  When we bring in the children to our Home of Angels we have little history about them and we realize, because of poverty, they would probably never have been able to afford the shots. Long story short, we now have children suffering from both measles and chickenpox at Home of Angels.  Because of your kindness, we have been able to have a doctor come in and inoculate them and the ones currently suffering are going to be fine.  No matter what is thrown at us, we know we are in God's hands and we trust Him to heal every situation. 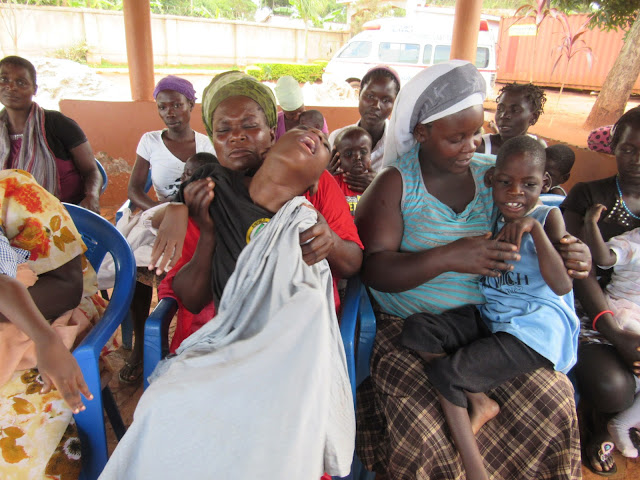 Two years ago, 20 women and their mentally challenged children came to us for help.  I was blessed to have witnessed this and will never forget them.  They had no way to survive.  They tried selling bananas and jackfruit on their heads, but all in vain.  They had nobody to leave their children with and as a result, no one would buy the fruit because they said the children were dirty. They really needed help, so Edwin and I rented land for them to plant for one year and the crops they produced were plentiful. 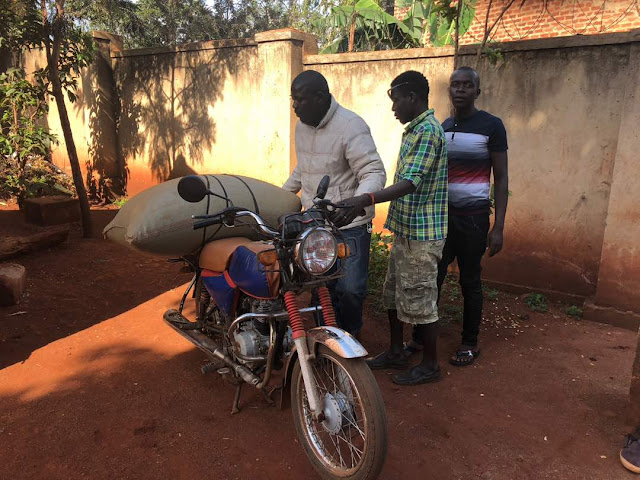 A few months later 4 motorcycles (boda-bodas) arrived.  Each one had maize and g-nuts for Home of Angels. These families wanted to thank us for helping them survive.  This is what it's all about and how God uses us to help the people of our community, Mpumudde.  They would never take it for granted.  They would give us their last chicken to say thanks for helping them.  For me, a white Canadian grandma, this was very difficult to understand how they could do this when they themselves were hungry, but I finally learned to say a simple "thank you" and be gracious. 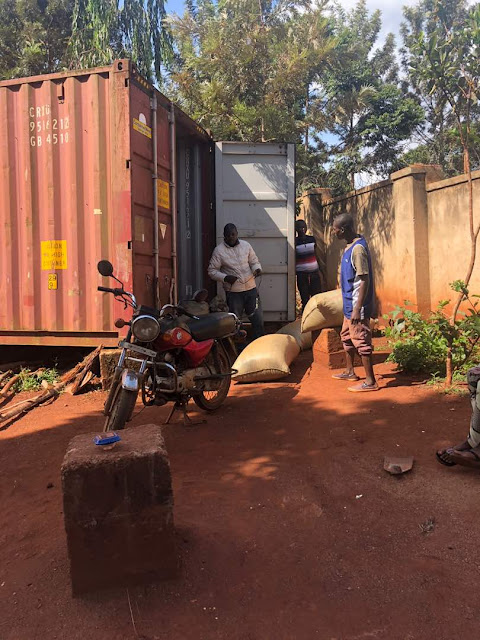 Storing the food in the container 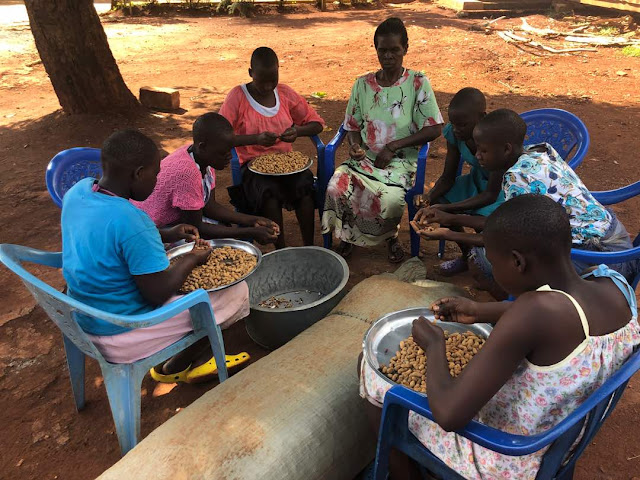 This blog took me 2 hours because of this one picture.  The kids are singing as they prepare the g-nuts and I tried to download it for you, but it was too long and it wouldn't work.  They are singing Stephanie Reddicopp's song "Psalm 42".  Stephanie, our dear friend wrote this song for the kids along with "Psalm 138" to learn in English and sing in Uganda.  They mastered it and I cannot believe that I can't attach this for you to listen to.  I'll figure out a way eventually. 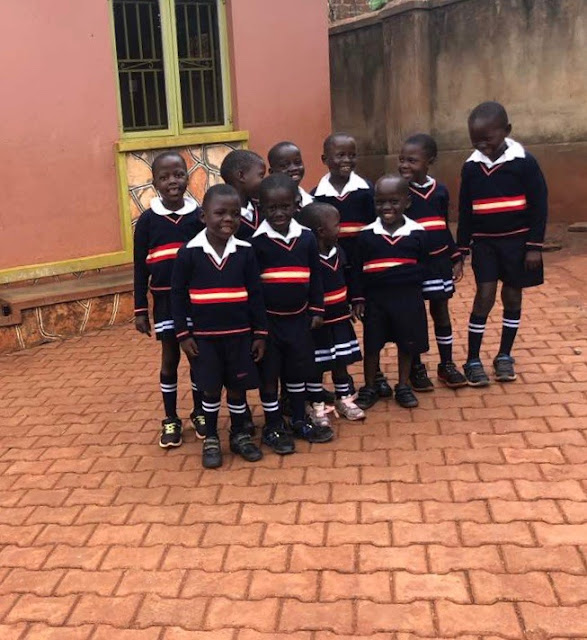 The nursery school children model their new sweaters and shorts for you to see.  These are some of our youngest children attending our new school. 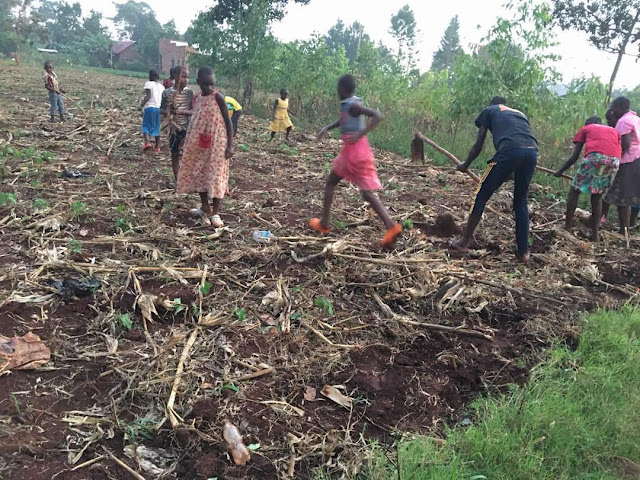 Our children take great pride in helping prepare the land donated to us for planting maize.  Maize is the main staple here and there is enough land for helping our Home of Angels and also the kid's "God's Little Angels Ministry". 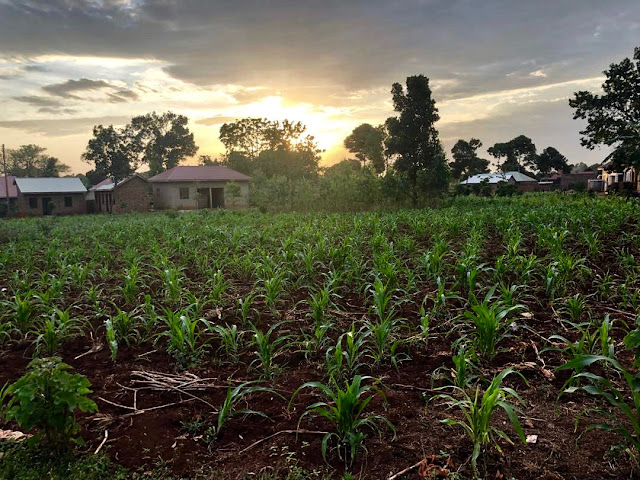 Look at all this hard work accomplished. 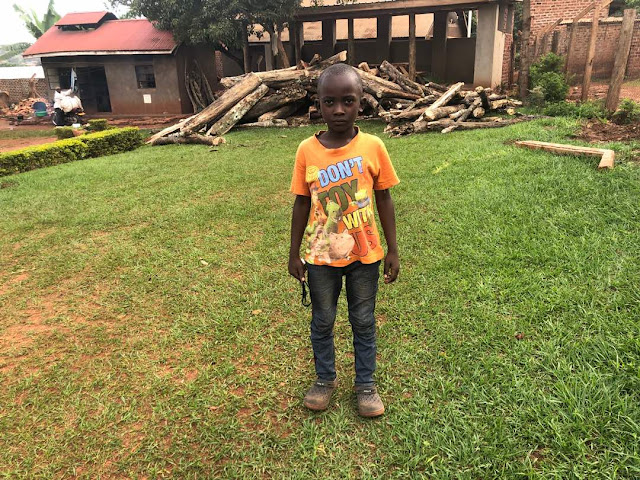 Meet James Kriunda.  He is one of our latest children to join our Home of Angels.  He was one of the kids abandoned from Agape Children's Home. I'm looking forward to meeting him soon. We thank Richard and his family for helping them until they could move in with us. 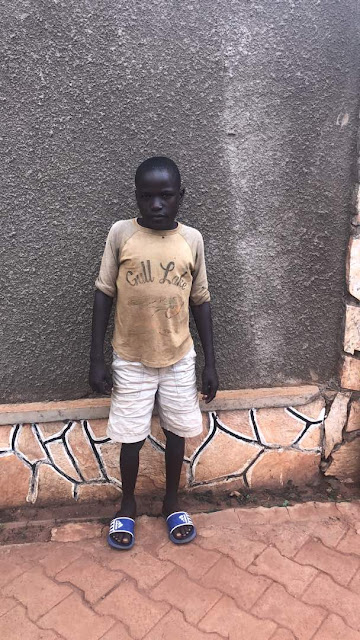 Meet Eric Muganda.  Eric has had a very sad life living alone but now, living at Home of Angels, he will have a chance to be happy with a loving family.

Thanks again to everyone that has stood behind this project over the past 10 years and for your prayers.  We have been truly blessed and we don't take a minute of it for granted.  I will be in Uganda this year at Christmas and will capture some great pictures and videos for you.