It's been almost 9 years since we started our Home of Angel's dream, and throughout these years we have been blessed with many people that have come alongside to help us.  Edwin and I are so thankful to many of you who encouraged us; sent funding and just believed in us that we could accomplish this project by selling loaves of banana bread.  We still have some projects to complete before getting ready for the new children to move in and figure we will reach our maximum capacity before school starts in February 2018.

This is our hundredth blog and we're proud to say that we've documented our journey every step of the way.  I have to be very honest with you all.  I am not a very wise person when it comes to business, but God provided people to guide me and provide wisdom every step I took.  He provided people to come into our lives that believed in us and trusted we would do the right thing.

We thank our dedicated funders who made such a difference in the lives of the people in our community and in our children.  Thank you to the people who help me with fundraisers, baking banana bread, sewing clothes, providing food and water and so much more.  There are no words to really express the gratitude that we have for you all but, my biggest fear is that I will forget someone.  Always know that I mean every one of you who made this dream come true. You are ALL truly special whether I mention your name or not. 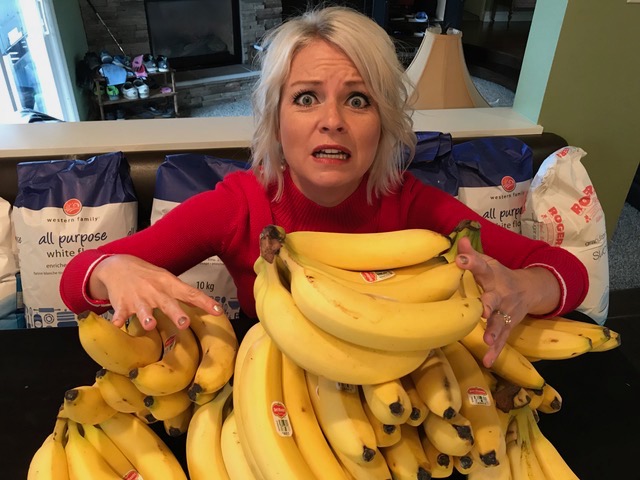 Stephanie set up a Facebook page called 30 Days of Banana Bread.  We created some funny videos to explain the project.  When people give a minimum donation of $30 to Jaaja Barb's Home of Angels http//www.kuwasha.net/jaaja-barbs-home-of-angels/ she will bake them 2 loaves of banana bread plus give 2 loaves to the Cyrus Center that helps the homeless youth in Abbotsford.  Search 30 Days of Banana Bread on Facebook to get involved.

Thanks Stephanie for your huge heart to help us in this way and help our local kids also. 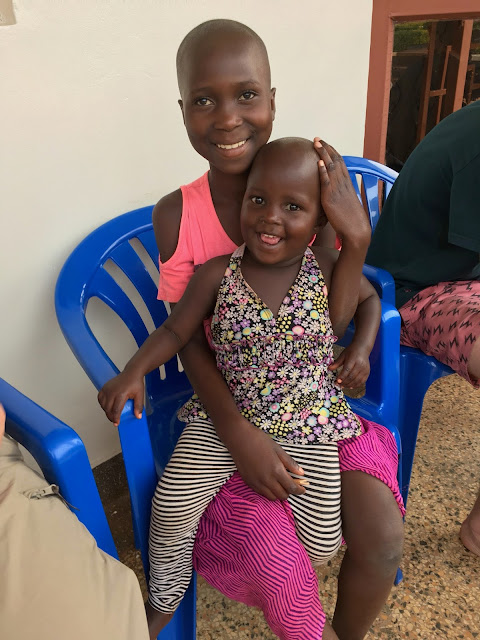 To date, we have taken in 4 children from the abandoned orphanage.  This little one is named Joweli.  She's 3 years old and loving the fact that she has brothers and sisters who care for her.  Her big sister Lovisa is making sure she is learning the routine. 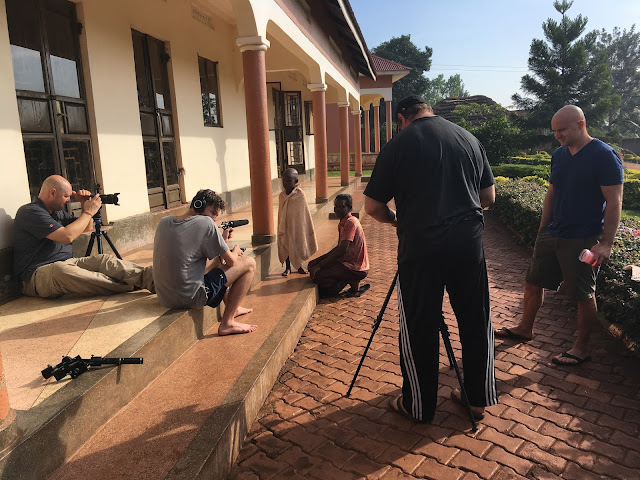 The film crew was hard at work every day filming the Human Project.  Our Aunty Joy, Yasin and Lovisa were the main characters and all three couldn't have been more professional.  Even though they didn't understand English, Edwin translated everything that the crew requested and it was acted out beautifully. 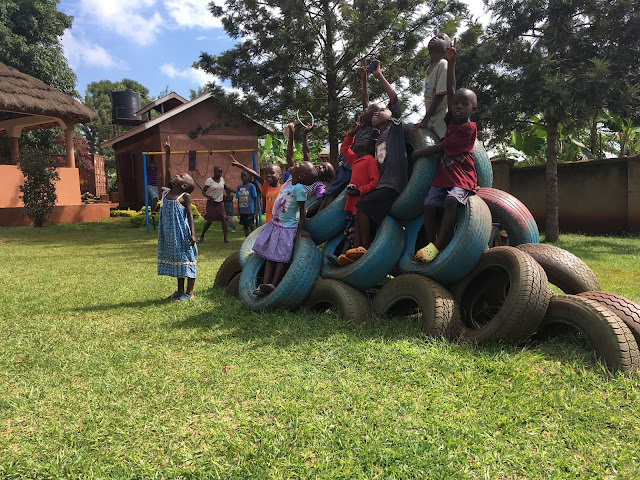 The kids were so excited when they saw something strange in the sky. 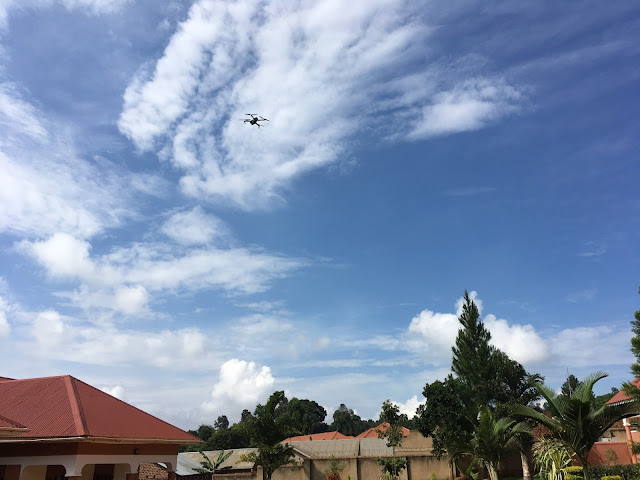 A drone from Canada, something they have never seen before.  The drone was used to film and when this documentary is released in March, I will be able to show you what it was filming. 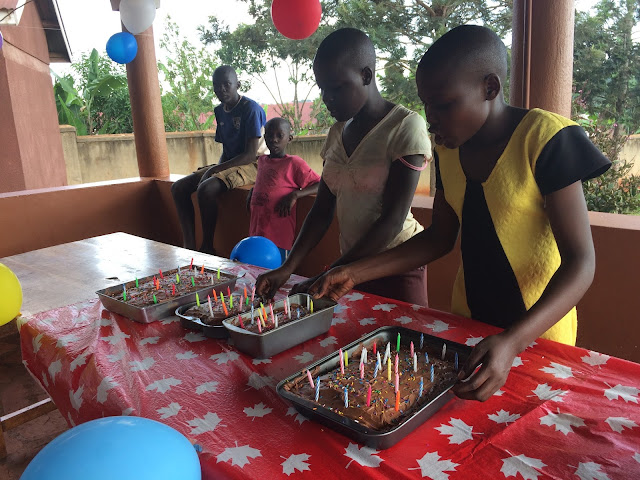 We decided to have a birthday party for Mariam and Yasin's Jaaja who turned 96 years old.  He had never had a birthday before, so the kids and I baked cakes, blew balloons up and decorated the grass hut.  Meanwhile, James, our worker took a motorcycle over to pick him up because he couldn't walk.
Everyone sang Happy Birthday as he sat and watched, feeling so happy that someone cared.  Thanks Jane for providing this party. 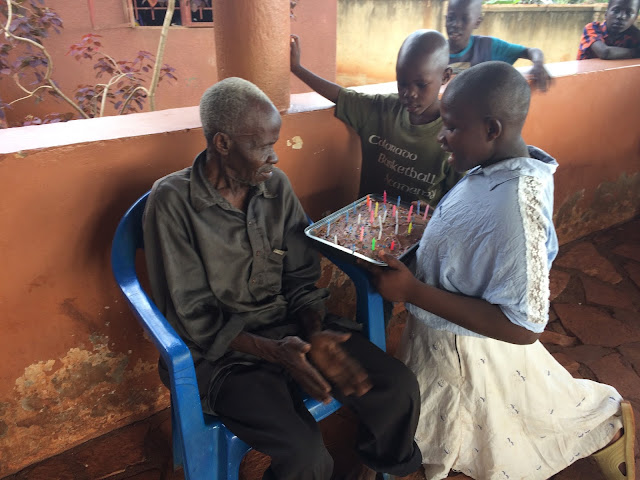 Mariam and Yasin showed him the cake.  He had never seen one before and I must say loved the taste.  He had three large pieces.  Our children normally have no living relatives but Jaaja wasn't able to feed or take care of them so we offered to help him.  It's these two that now take care of him by helping him fetch water and making sure he's got everything he needs. 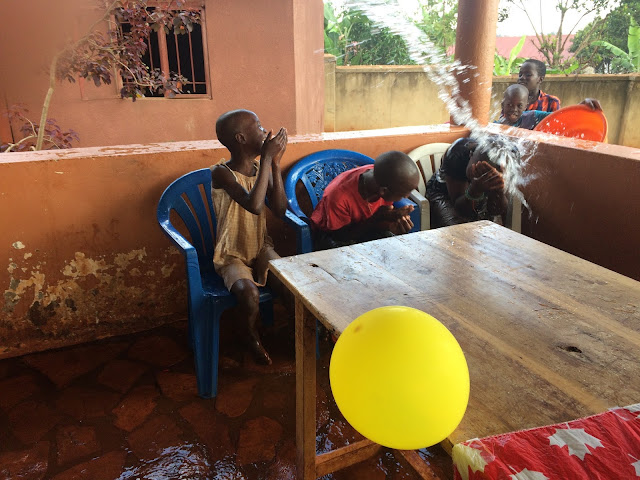 There was also another surprise.  Lovisa, Mariam, and Desire had a birthday that week and we secretly prepared for that one also.  Tradition says....buckets of water thrown over them but the fun part was that they had no idea we remembered.  It was a happy day all around. 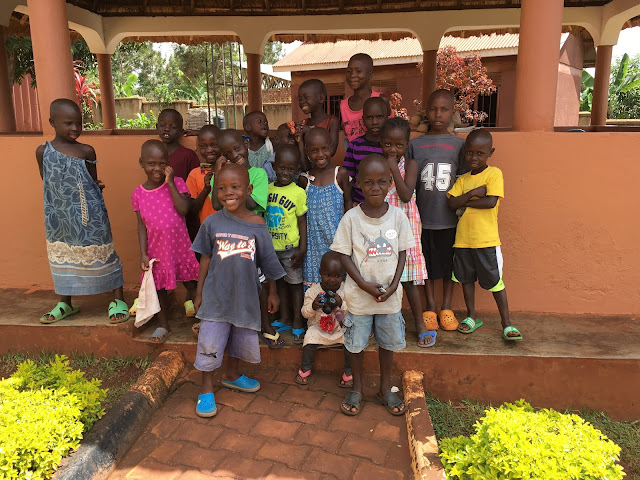 We recently added 4 more little people to our home and they really are a happy bunch.  Always playing well together, never fighting and the one thing that I really notice is, they share everything they have with each other.  One skip rope will be shared between everyone and they all get a turn.


It's been a wonderful year and so much to be thankful for.  Thank you, everyone, for following our story and encouraging us along the way.  We truly have a family of children that love God and will help others because of the love they have been shown by many of you.

We would also like to wish you and your families a very Merry Christmas and Joyous New Year 2018.

I apologize for this video below.  It was supposed to show you our compound but it didn't work and I don't know how to remove it.  Just ignore it and chalk it up to a grandma that isn't too good at technology.  :)