The Beauty of Brokenness

What is brokenness?  I understand it as a state of strong emotional pain that stops someone from living a normal life.  Twelve years ago when I arrived in Mpumudde, Uganda, that's what I witnessed for the first time.  Watching children picking weeds on the side of the road so they wouldn't starve was an eye-opener for me.  Brokenness, caused by poverty, homelessness and starvation, just to name a few.

We can't put everything back together at once but we can take each broken part and put it back piece by piece.  Over the years Edwin basically went looking for these broken children, trusting God to give him the wisdom and skill in making them whole again.  Today, with the help of his wonderful wife Precious, those children that were approved to live at Home of Angels are now put back together thriving as brothers and sisters in a home where they are loved.

This past month has been very difficult with COVID-19 at HOA and in the Jinja area.  Both Edwin and Precious contracted it along with John, our contractor and his workers.  The children were once again evacuated to Malindi village to prevent them for getting it too.  Edwin had no chance for any updated pictures at this time so I thought it would be fun to surprise you with a video that we put on YouTube of the children and life around our community of Mpumudde. 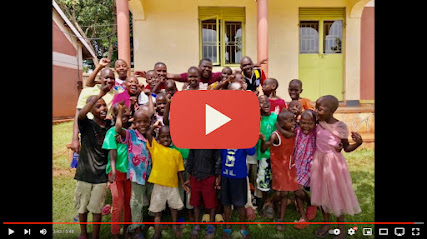 Piece by piece, these children have been put back together.  Look at the results!
Due to our economic environment, some of our long-time sponsors have had to suspend their sponsorships.  If anyone would be interested in filling their spots, please let me know and I will send you an introduction and information of that child's life. 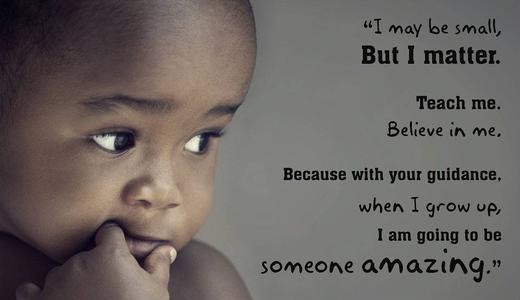 The children in our Home of Angels have suffered tremendously in their short lives.  These children have watched their parents die: abandoned to live alone on the streets and subjected to neglect and abuse.  They've been targets for all sorts of cruelty.
At our Home of Angels, we bring these children into a safe home; provide care, nutrition, support and much needed love.
As a child sponsor, you can make a big difference in the life of one of these kids.  For a minimum of $40.00 a month, or $480.00 annually, you can help us to raise a child.  Just contact me for all the information and I will get right back to you.  barb@jaajashomeofangels.com  Thank-you.
Thank you so much for standing with us to help the less fortunate in Uganda.  Whether it was helping our orphaned children or the many suffering in our community from lack of food and water, "we" and "they" are truly grateful to you all for caring.   God bless you all.
Posted by Barb at 3:02 PM 0 comments

Life certainly is a journey!  In the previous blog, I spoke about situations happening with floods here in the farming community of Abbotsford, wiping out thousands of animals and destroying many farms.  Also, in Uganda, stories regarding death from starvation because of almost two years of lockdown.  Our journey often travels through uncharted territory when the path ahead isn't clearly visible, but whatever uncertainty or challenges we might face, the Light is always with us.  Even in our times of genuine struggle and pain, we can know God's peace and permit it to rule our hearts.  That's what Edwin and Precious are currently doing as they both have contracted this nasty virus COVID-19.  The children and staff have all been evacuated to Malindi village where Edwin's family is looking after them until it's safe.  Our compound is being protected by our guards and police while the workers are continuing to build the church.

Due to lack of current informaton, I thought it might be fun for a change to send some pictures of what I experienced while I was on my learning curve in Uganda.  It opened my eyes and it will make you all understand how blessed we are to have what we have.  Also, will you please pray for Edwin and Precious that they get well soon and can resume their normal life.  Thank you!

Our Aunties heard that in Canada, we make cakes for weddings.  They had a special friend who was getting married and wanted me to make them one.  We didn't have an oven at that time ...... so 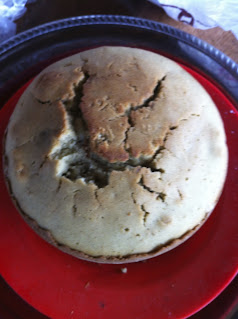 Out comes the charcoal pot and we heat it up!   So far so good!  Mix the ingredients and in they go. 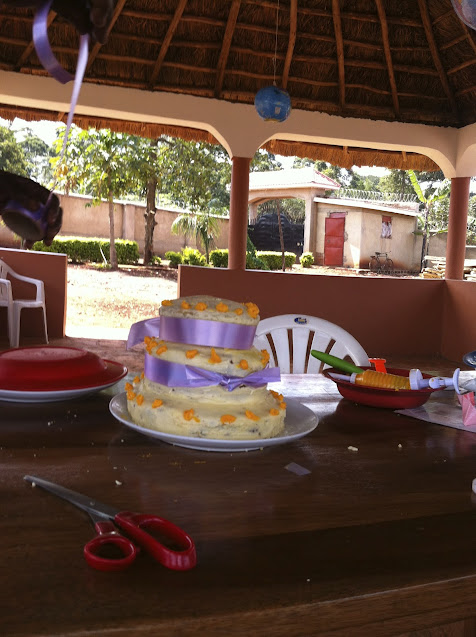 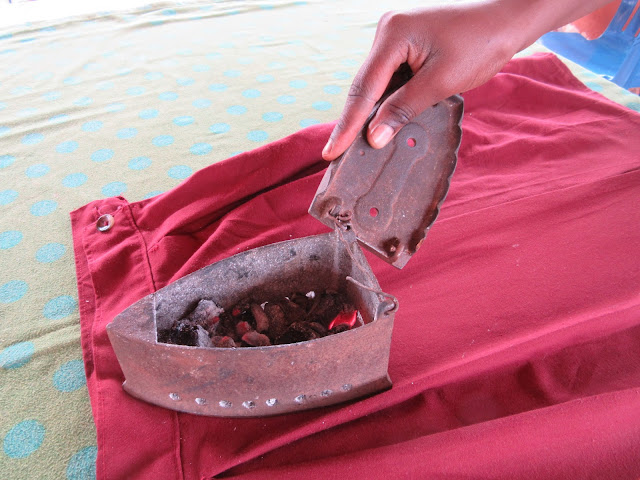 It's mandatory for school uniforms to be pressed each day and I noticed the older girls were taking turns in the grass hut doing something each night.  I know I'm old but I don't think I remember this iron. 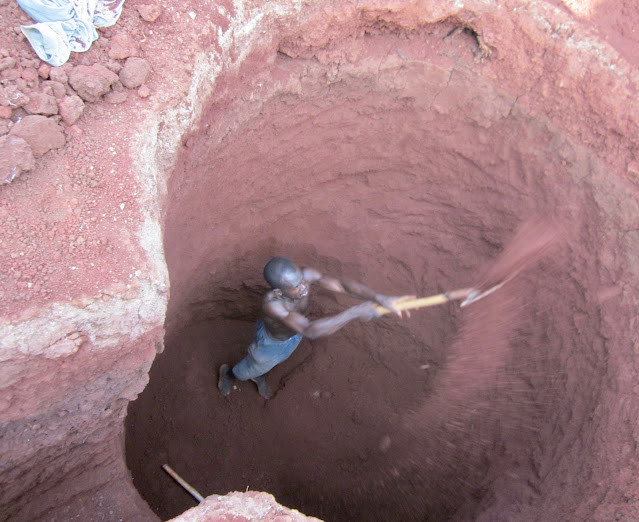 Our dear James, who for one year (2009) helped Edwin clear the original coffee plantation to build a small house for garbage dump kids.  That's how we started....one little home, but as you know things changed. James himself dug three bore holes like this one and never complained.  By 2019, his body was broken and as much as he didn't want to leave, we covered all his expenses and moved him back to his village of birth to heal.  He will never be forgotten for his dedication. 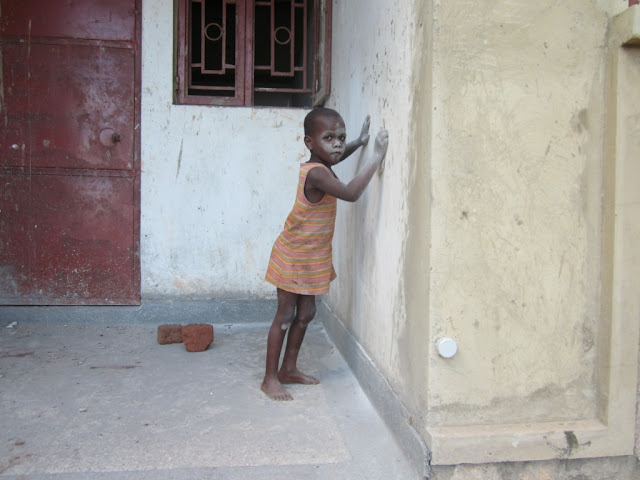 This little sweetheart almost lived with us in the beginning with her brother Grace.  Yes, a boys name in Uganda.  She would always want to help us no matter how difficult or dirty the job.  I'm not sure if she was trying to be a Muzungu (white person) but to this day, she and Grace always know when I come back, climbing the tree on their property to welcome me and ask if I have a soccer ball for them.  Of course! 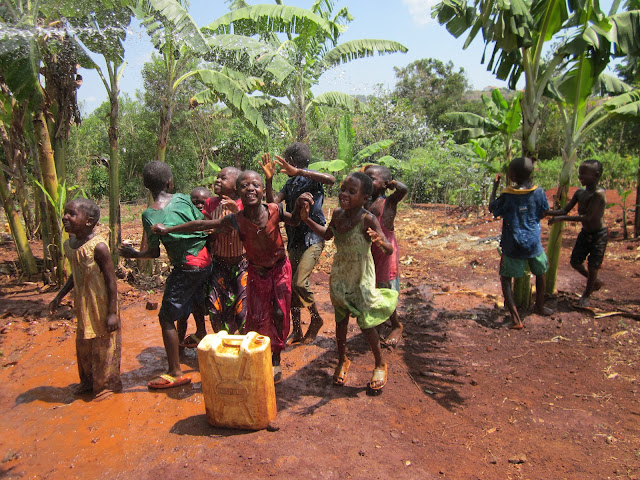 If you haven't heard the story of how we were able to dig our Home of Angels borehole, it was because of amazing friends, Laury and Tom who sold their cow "Faithful" to raise the money to do it.  When we finally reached water, our specialist Dennis came and hooked up the hoses to fill jerry cans.  The entire community was invited.  This meant not having to walk 8 kilometres that day to fetch water and they were so excited.  After hooking up the hose, Dennis decided to do something never done before.  Spray the kids!! I think it was the first time they've ever felt water on their bodies like this and look at these faces.  Mom's were horrified. How could they waste water??   We knew we were pumping 5,000 litres/hour and we had lots, so not to worry.   To this day, 11 years later, it's the same pressure. 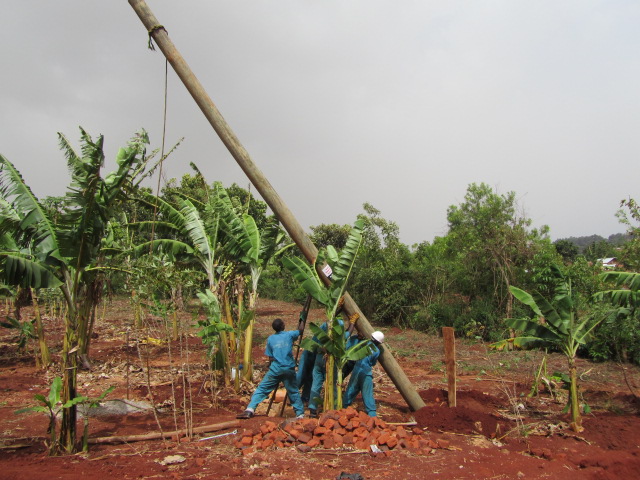 We ordered electricity for the compound and to get it usually took months.  It was on a Saturday when Edwin and I went to the compound to see what was happening, when a large truck with 9 men and poles came toward us.  I had a movie camera given to me by Global TV and when I saw them I told them they were being filmed.  Quietly they continued on, removing the poles from the truck, hauling each one into a position where they dug a hole with what looked like a large stick. I never saw any equipment. Up they went; into the ground and the men left.  I was filming the entire time.  Sunday, we returned.  The wires were up, electrical box attached to the house and electricity was on.  Every neighbour called Edwin to find out how much he had to bribe them. 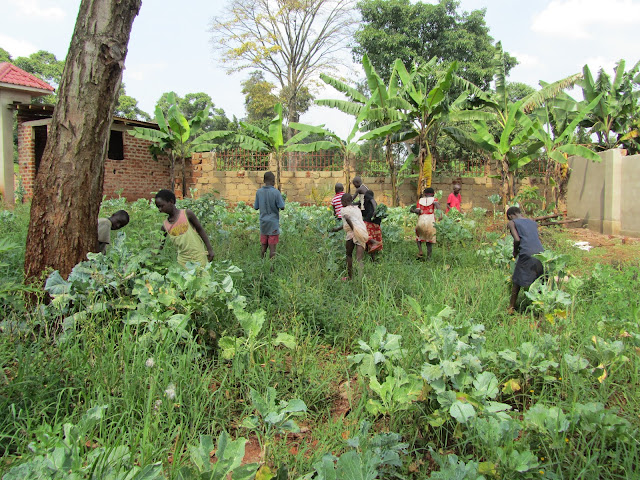 During our first year of construction, we had many children asking if they could come into our home and pick weeds.  I never understood why at first but soon learned they had no food.  They would pick the weeds to take home to cook for dinner.  What a wake-up call that was for me.  I started purchasing rice so they could at least have a rice-weed stew and they were so happy. I learned later these kids came from an abandoned orphanage close to our home.  Since then, we have taken in an number of these children. 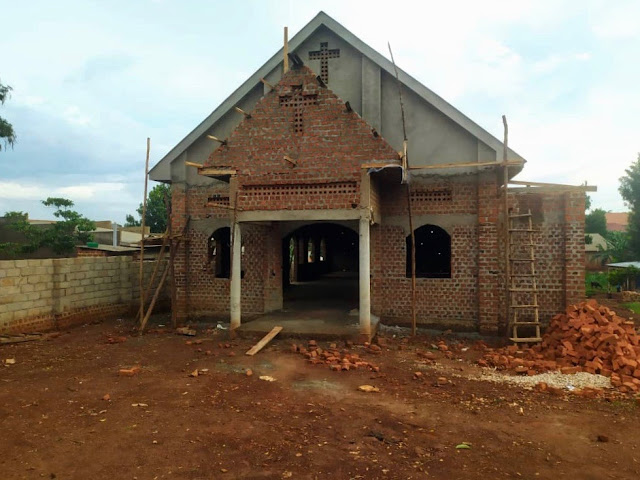 Our church is coming along well, even though we've had heavy rains and of course COVID-19 got in the way.   The next picture I send will really give you an idea of how beautiful it is with the windows and doors put in and the bricks plastered.  The community is getting very excited and so are we.

Thank you everyone who contributed to our Home of Angels throughout this past year.  You have helped us fulfill our dreams of schools, food for the poor, Bibles and our beautiful church.  You have helped us to raise each child in a way where they've felt real love and that they had a real family.  Thank you for that.

I wanted to let you know also that Edwin and Precious are feeling much better.  The children are still away until they can be sure not to contract anything.  Thank you for your prayers.