Edwin and I have always believed that each one of God's children has a special purpose and a unique personality.  Each child that has entered Home of Angels has their own devastating story to tell and believe me, some of those stories are heart-wrenching.  Most of us are led to believe that happiness is a final destination when they come into a home like ours but it's a journey and doesn't happen overnight.

Thirteen years later, we are now starting to see the results and it's been all worth the wait.  The trust is there; they have a family who loves them and most of all, they know that God is in full control of their lives.  They can go into the community and help the poor and the widow; they can help provide food to the hungry and most of all, they show the people that they really care with their smiles and love.

We wanted to also let you know that an assessment was done on our Ptarmigan primary school by the District Education Officer for Jinja and surrounding districts.  Our kids were tested in their level of English abilities and they did so well, we were rated #1 school in Jinja and also #1 for the best environment for learning.  What an honour.

Edwin was also called to attend a meeting with the probation and police officers. They wanted to get permission to use HOA as a role model of a good home to raise children.  It's to do with feeding the children with healthy food, separation of girls and boys at night and so on. Many children in orphanages have no skills to survive when they leave and the boys usually end up in prison and the girls get pregnant.

Speaking personally, I want you to know that our God is an amazing God.  When I see all the things that have happened, I'm blown away.  It's not Edwin and Precious and it's not an old lady and a loaf of banana bread.  He's used all of us, including many of you to be a part of this amazing family.  Thank you!! 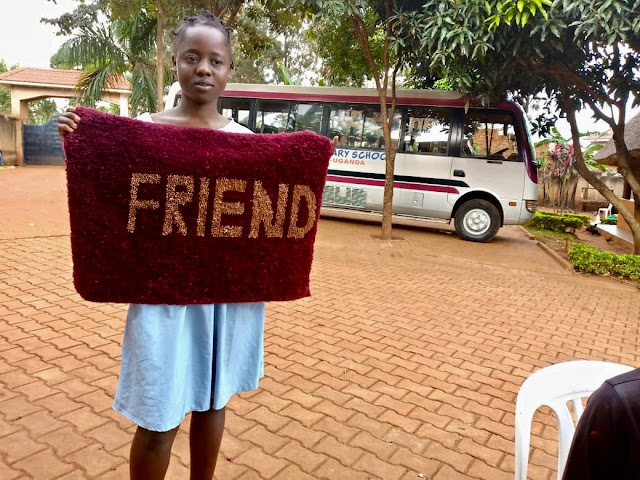 Eva is so proud of the door mat she made in the trade centre.  The older girls are working hard to learn a skill to fall back on when they phase out at 18-years.  Most of the kids grew up inside our walls and without a trade, they wouldn't have had a chance to survive with the cost of living the way it is now. 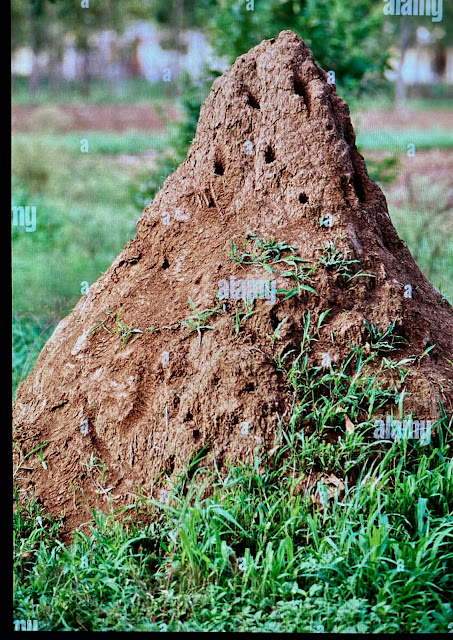 I've recently learned a lot from this picture.  I've seen people in Uganda sitting on top of them trying to get a cell connection but what I didn't know is that they also can be built under ground.  Our main house was built ten years ago and apparently has one of these hills growing down.  Until we can find the queen, they won't stop enjoying our wood. 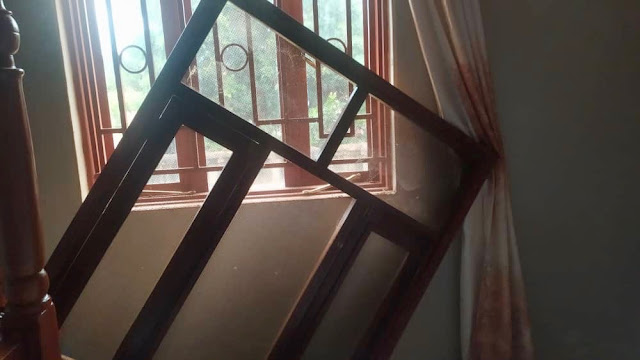 One of the last times I was able to go back to Uganda, the wooden frame of my bedroom window fell completely out.  We thought the land had settled but with all the other destruction in and outside the house, it's more than likely they were at work then too. Termites and army ants are similar but the wings on the termite are longer than it's body.  We're in the process of repair now and hopefully be able to locate their home soon. 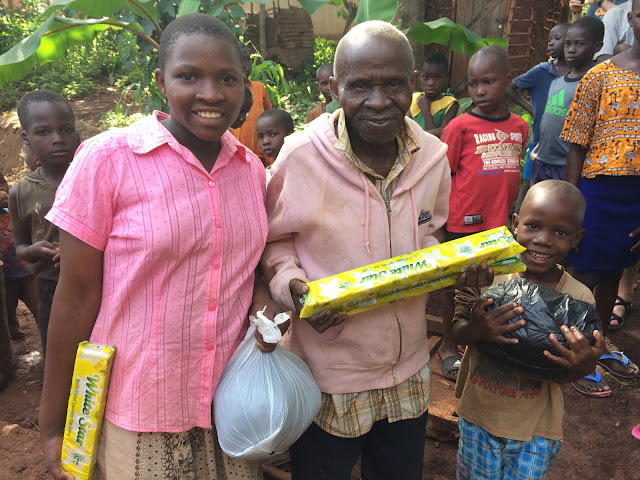 So I found out today from Edwin that I am REALLY old.  Average life in Uganda is 40-years-old and I'm heading to almost double that.  I beg to differ when I see Jaaja here who is 100-years-old.  This is Mariam and Yasin's Jaaja (Grandpa) and they take good care of him.  His stories are amazing.  He would tell me how he would sit in his mud hut with a fire and watched lions circling at night.  There was no alcohol then and all he did was hunt and dig. 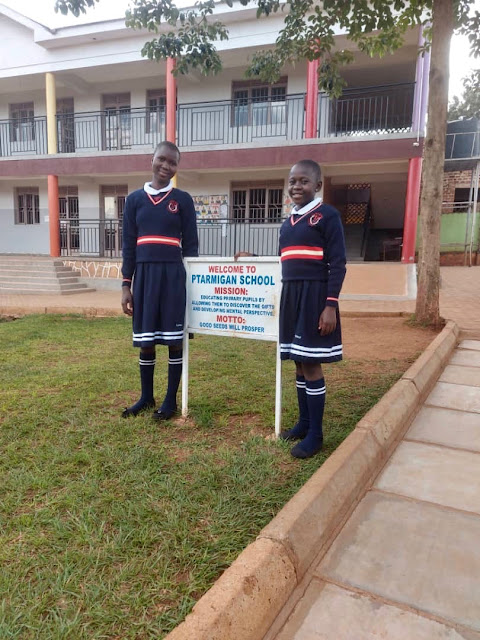 Bridget and Lovisa in their new uniforms.  The children love school and I mean love it.  They go every day except Sunday and still can't get enough.  If this video at the end works, you'll understand why. 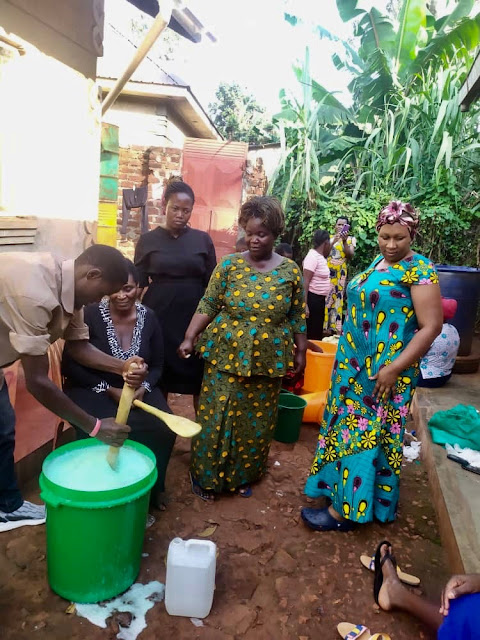 Our LOVE Project is growing again.  We started out with 32 families with mentally and physically challenged children and we are now up to 87.  They have formed their own community and because
of people like Precious teaching and helping them, they're surviving.  Soap in Uganda has tripled in cost and a poor person cannot afford it.  Bottom line, everyone is desperate so Precious taught them to make soap and sell it in 1 and 5 litre bottles plus 10 and 20 litre jerry cans.  They split the money and all donate $3.00 of their sales to their newly opened bank account.  Precious is the treasurer.  That money will allow them to purchase the ingredients to make more next time.  They are also making chalk for schools. 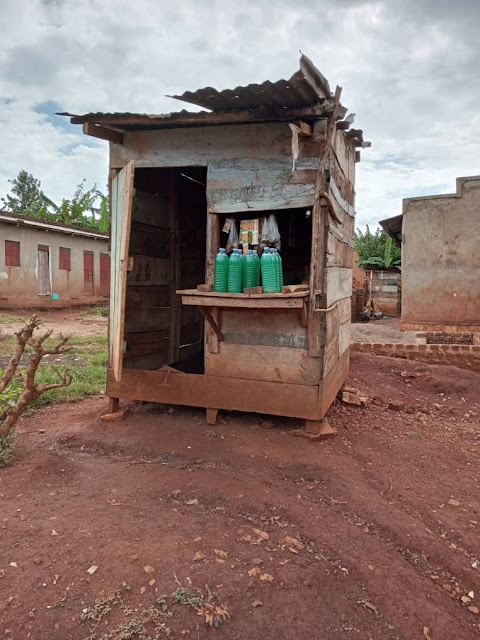 The LOVE project store outside their homes 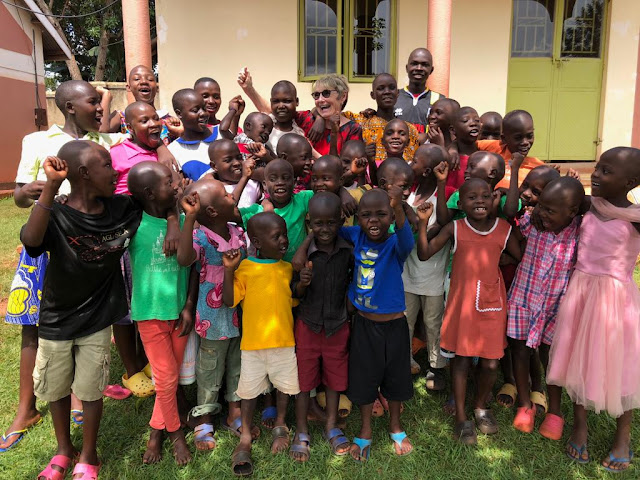 This picture is a few years old.  When I see pictures now, I can hardly recognize these children and I cannot put into words how much I miss them. 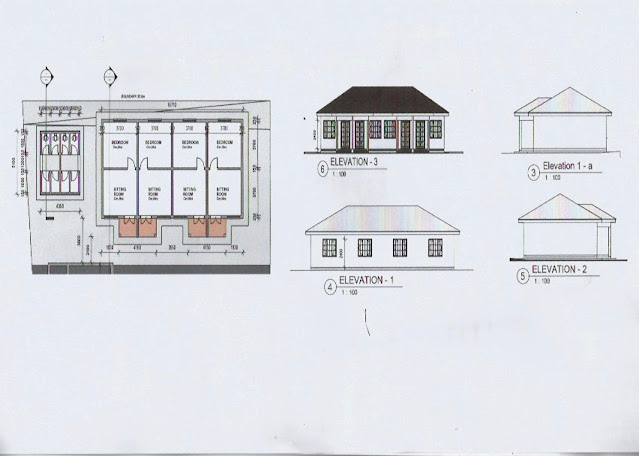 In order to make sure our kids have a trade under their belt, we are building a small house they can stay in when they must leave HOA at 18-years-old.  This will only be for girls as the boys are still young.  Thank you Ames Family Foundation for your kind hearts.  We're thinking of making some more "John's John" over here.

We had to have this video put on YouTube for it to work properly for sound but this is our surprise for you.  Every child at Home of Angels is now speaking fluent English like Lovisa is here.  Lovisa is the same girl that acted in the "Human Project" a few years ago.  Before that, she rarely ever spoke.  The children wanted to thank the Ptarmigan family for the education they're getting so our shy Lovisa volunteered to speak.  They are all so grateful for the education they're getting here.

I have to share one more thing.  In our nursery school, the tiny little ones are learning English also.  They go home after school each day, have dinner and continue speaking English.  The families are so surprised and are learning a few words from them.