It's been almost 10 years since Edwin asked me to help him build a small and very humble home for children.  I did and as the children arrived over those years, we grew and we found many creative and practical ways of showing them unexpected love, patience, and kindness.  God pours His love into our hearts to flow out to others' lives.

The children that live at Home of Angels ask so many questions.  Where did I come from? How old am I?  When is my birthday?  This is the reason that a huge birthday party for all of them together means so much.  I notice sometimes that the name of the child I tell the sponsor is not the same as a report card name.  This is because of culture and sometimes they may have up to three names.

We've been in existence since 2009.  Some of these kids have been with us ever since then.  When we started the construction , we let some of these same kids come on our property to eat weeds before it was cleared. That was their staple as they grew up but of course we always added rice and vegetables to spice it up.  Now, thanks too many of you, these same kids have a home, go to school, and they are loved.  Maybe they don't have the same brain as you and I because of eating weeds every day, but they work their hardest to be the best.  Edwin and I are so proud of EVERY one of them.

I've always tried to send monthly blogs on both the changes in the children as they grow and different situations that happen at our Home of Angels.  Oh my goodness, when I received the children's pictures today, I almost fell over in disbelief.  Not only had they grown, they are so happy and healthy.  No wonder every child wants to be an angel in our community.  They all want to have their hearts mended too, but we can only love and help them when needed.  And we do! 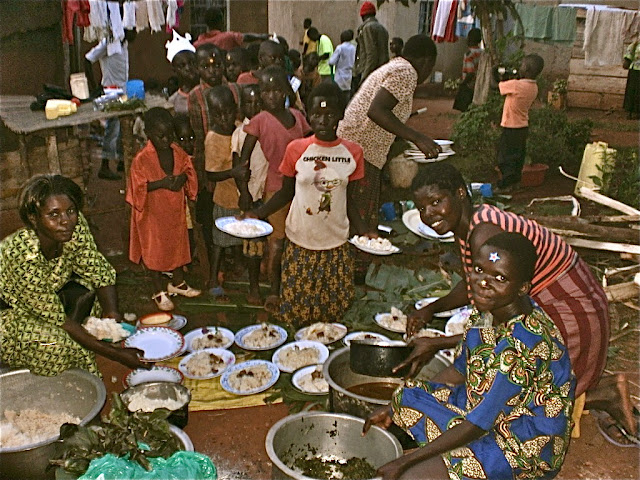 The first message I ever received from Edwin was, "Jaaja, can you help me feed some kids in the garbage dump?"  I didn't believe a word of it, but me being me did it anyway.  After feeding them, he sent a picture of the party on the street with the women that helped him.  The children even had Christmas stickers on their foreheads.  From there, we decided to build ONE home for children who wanted to be called "angels" instead of "orphans". 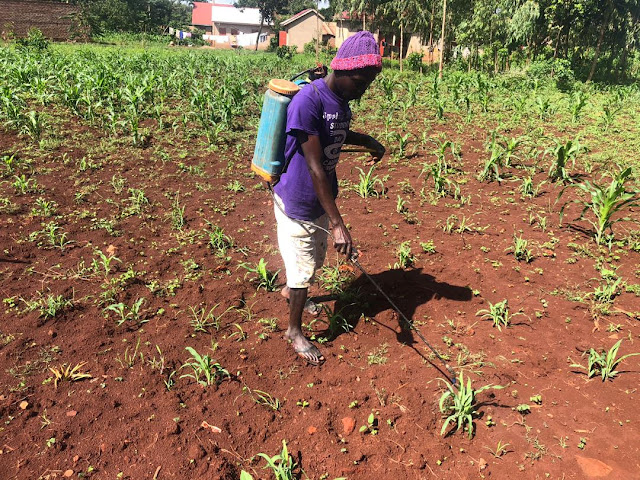 10 years later, here is Sula spraying the maize that we use to feed the children.  I know...that word spray but since we keep losing the crops to a disease called "wilt", this is necessary.  The land was lent to us by a friend and it looks like this time we might have a good crop.  Global warming has hit Uganda also with very harsh rains. 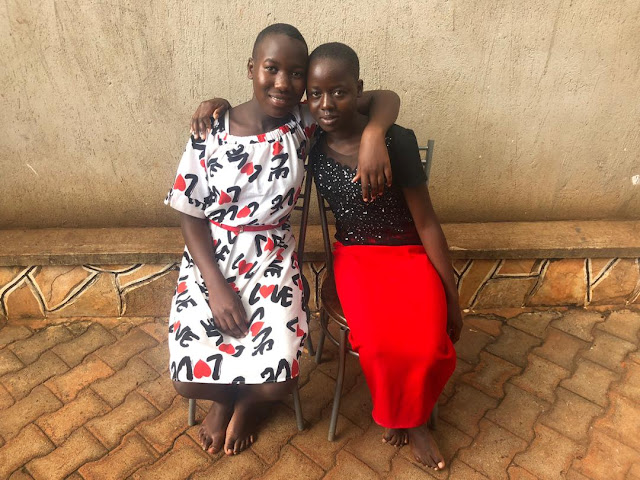 Look at these beauties....Zakia and Eva.  These two girls came from such dire circumstances and I remember so well how frightened they were when they arrived.  I was there when Zakia came and I arrived the day after Eva came.  I had a card or letter from each sponsor and I remember Eva sitting in the corner, tears streaming down her face.  I will never forget.  The other kids had someone to care for them but she didn't yet.  This is how the kids feel when you sponsor them.  They honestly feel love for the first time. 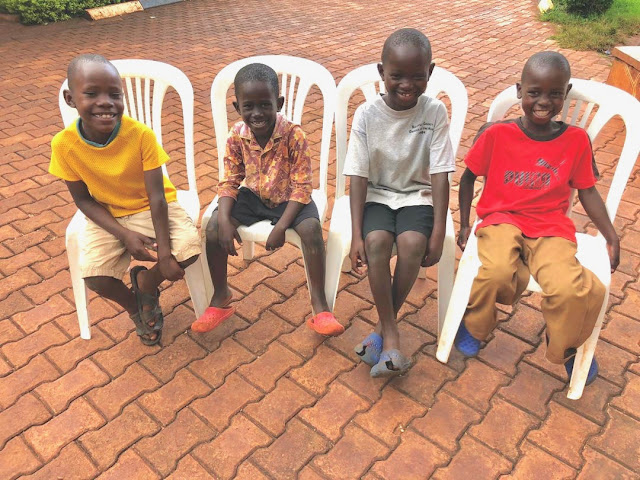 Meet Yasin, Davis, Elijah and Jimmy.  It's so good to see Jimmy smile.  He arrived with his twin brother Derek in 2014 but Derek soon died and was laid to rest in his village.  Jimmy attended his funeral but the tribe he belonged to had to mourn in the bush for one month and Jimmy came back to us very different.  It has taken a few years for him to return to the real Jimmy.  We believe witchcraft was involved. Jimmy now prays to God at praise and worship every night before bed and we believe the evil ones have been eliminated.  Jimmy is back. 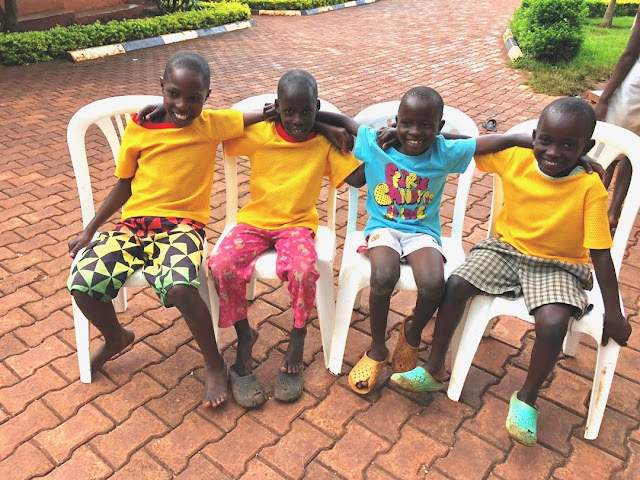 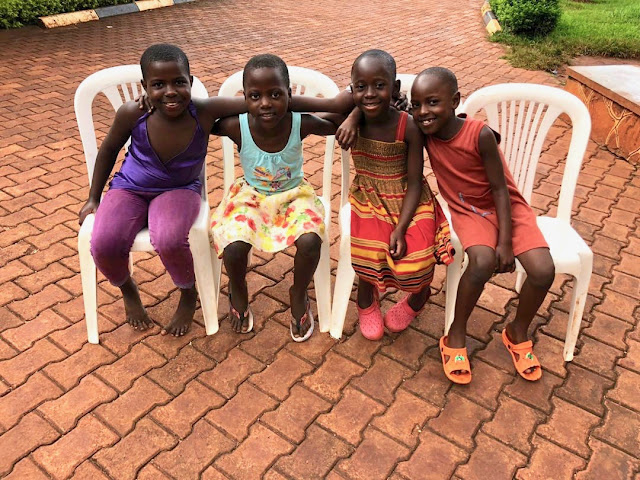 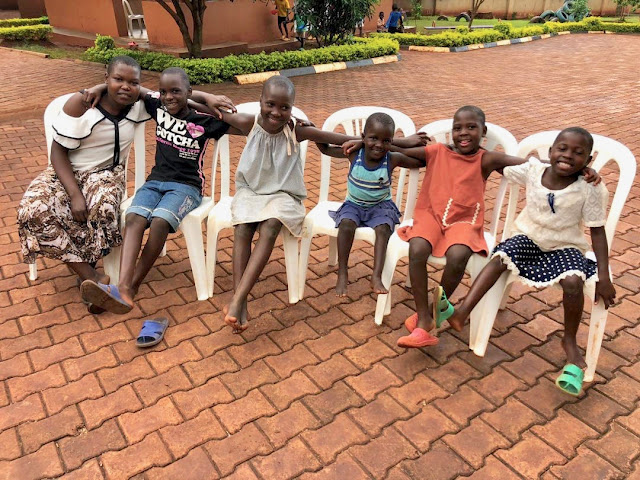 Here we have Joanne, Barbra, Lovisa, Joweli, Betty and Precious 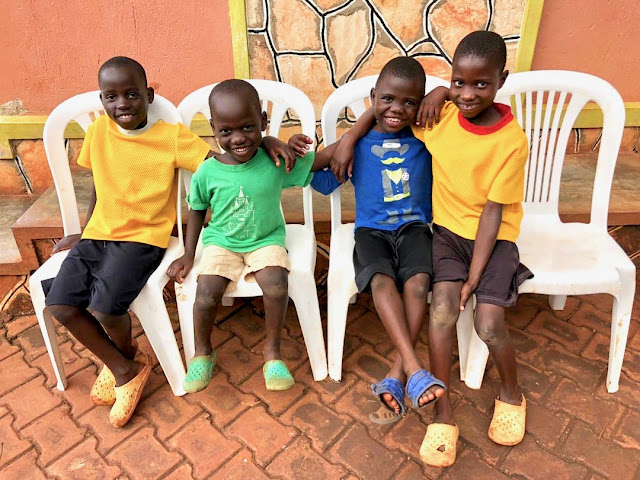 Meet Eddy, Sam, Yahigha, and Paul.  I remember last time there when little Sam was alone so much and Eddy (with his arm around him) said he was going to be his friend.  He still is and I'm so proud of him.  Sam has had a very rough life and is not strong.  Because of Eddy, everyone helps him. 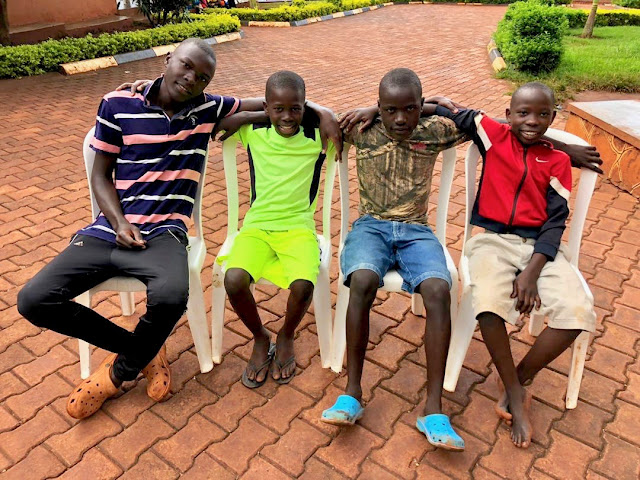 Oh my goodness, look at Junior.  He is one of our original kids and was so little at that time.  He's a giant now and I only come up to his armpit.  We are so proud of how he turned out.  He's a good role model for all the little people there and we'd love for him to continue working for us in the future. 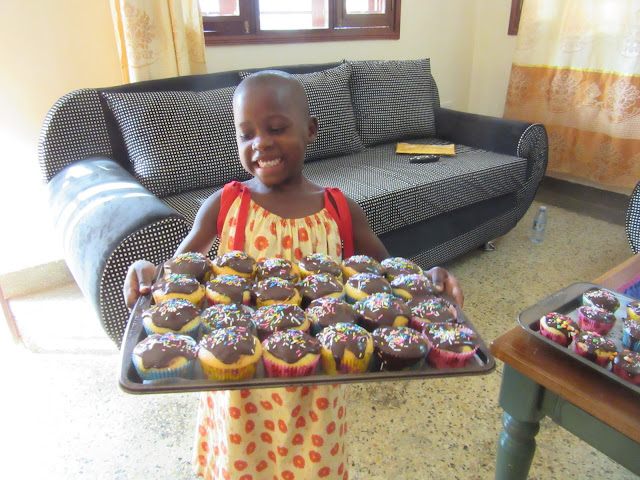 OK, so we have an idea for the FUTURE.  Only an IDEA.  We don't want these children, at age 18, to just have to leave with nothing.  They will never survive on their own and no matter how much schooling they get, usually they won't find a job.  We've seen this so much in our area.  When I go there, we bake and everyone gets a turn.  We bake mostly banana bread.  This picture is Precious with her cupcakes   The girls approached Uncle Edwin and I about starting their own bakery where they could make and sell different baked goods.  They love to bake and they feel this would help them in their future.  Everything begins with a thought, so we'll really think this one over very carefully. 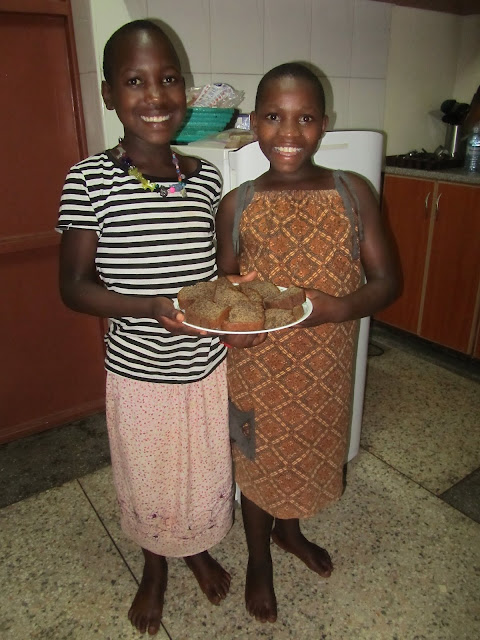 Mariam and Zakia made 8 loaves while I was working on the computer and forgot about them.
It honestly was better than what I make.  They want so much to keep going with this. 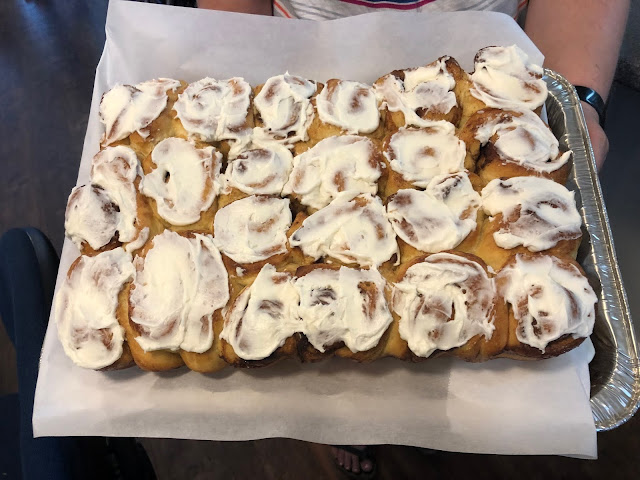 So, with this thought in mind, what would it look like if we made these cinnamon buns also?  We'll be leaving in January and it's holiday time for the kids to be able to teach them.  Just an idea but without ideas, how can you ever make miracles happen in the future?


Thank you everyone for helping us and thank you for having patience as we learn the ropes to be our own charity.  We are so excited for the future to help others who cannot help themselves.  Without  God and all of you, we could never accomplish any of this.