As many of you know, I returned home from Uganda early in January.  One reason being that I was witnessing so many people dying from lack of food and water.  I was becoming as callused to death as the many who live there had become.  The last rains anyone could remember were in June 2016.

I felt God calling me home for two reasons.  There was very little water left in the swamps.  The town pumps had been turned off due to low water levels and the people were constantly telling Edwin and I that God had forgotten them.  He had not forgotten any of them.

Many of you felt the urgency on GoFundMe to help dig a bore hole for them and in two days we had enough funds to begin.  The aquifer they found was very large and we were told it will service five villages for many years.  On a sad note though, one of our drillers was bitten by a black mamba snake and died.  R.I.P. Andrew.

We were also blessed with more funds to continue on with a second bore hole in yet another very poor area.   We will keep you all updated on this one also as another "Perfect Gift" unfolds.

Thanks so much for caring for these people who literally have nothing...no water, food, electricity, medicine or medical help.  Believe it or not, they will now survive with this water thanks to you.

It's been suggested that we go on GoFundMe once again to help another area survive.  I would love to hear from you if you think we should try for a 3rd and final well.  It's now been 10 months with no rains. 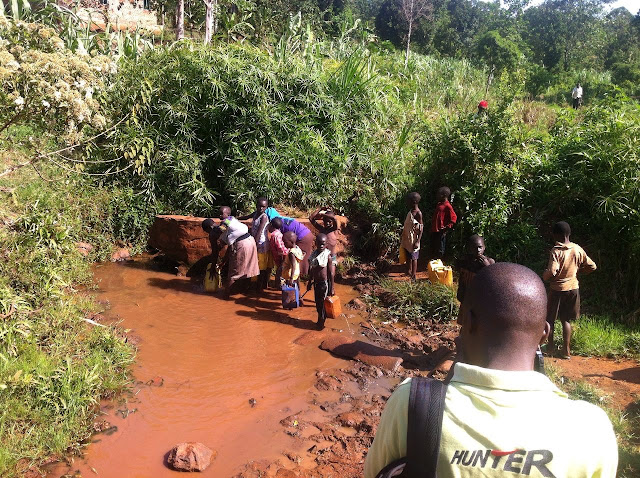 Media filming what's left of the regular source of water

In the meantime, we would like to show you the reaction of the villagers when clean water exploded from the ground.  There were 7 TV stations, 1 radio station and 3 newspaper organizations there to witness what God and the world had done for the people in our impoverished community.